Télécharger notre catalogue
Sort by:
Relevance Name, A to Z Name, Z to A Price, low to high Price, high to low
Showing 1-9 of 26 item(s) 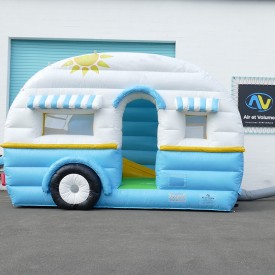 This Caravan bouncy castle will make you want to go on vacation. Long live the campsite! This inflatable caravan-shaped game has several obstacles, a climb and even a slide. Children will love to have fun in this caravan. This bouncy castle will remind you of your camping memories!

The advertised price is from Nogent-le-Rotrou 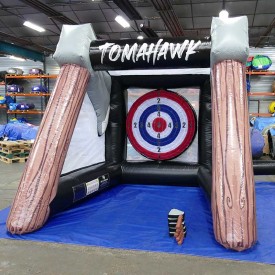 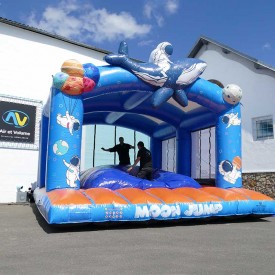 Moon Jump: An Inflatable Game to bounce off the Moon !

This Moon Jump inflatable game is part of our Soft Mountain or Soft Dome inflatable game range. The "Soft Dome" part of this inflatable structure is a lot of fun because falls are frequent, especially if other players jump on it to make everything move! Kids will love climbing, jumping and bouncing on this soft surface to heckle and knock their friends over. Nothing more fun than a soft mountain! This space-themed inflatable game will take you to the Moon. Children will imagine themselves as an astronaut walking on the surface of the Moon.

The progression on the soft dome will not be done easily, each of the players evolving on this structure will be able to destabilize the dome to trip all the other adventure companions. Laughs guaranteed. The return to Earth will be safe. Indeed, the structure is equipped with protective nets all around the game. The inflatable mattress will receive all falls gently.

Aim for the Hens to score points! The Poulette Inflatable Column is used with our interactive game Buzz'Flash Shooting Game. The targets take place on our hens and the funniest thing happens: you have to shoot them! For more difficulty, the column turns on itself. 2 teams compete in 4 speed mini-games. Thanks to these 4 game modes, players can have hours of fun. The Inflatable Hen Column allows you to use the interactive Buzz'Flash game in a small space. This game is very easy to set up and takes up little space. The Ball Trap in the colors of your Park! This inflatable column is fully customizable with the colors and themes of your park or play area. 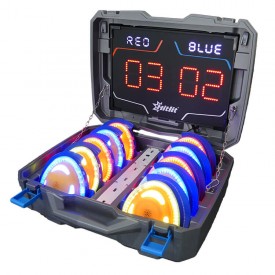 Buzz Flash is an Interactive game adaptable to all surfaces !

The BUZZ'FLASH is an innovative interactive game system, it offers a new way to operate and animate your inflatable games! Two teams compete in mini-games of speed. This interactive system brings a playful character to your leisure activity. You can install the targets within an inflatable structure, a wall, a vertical wall ... A screen allows you to display the final scores and follow the progress of the two teams in real time. An enclosure announces to players the start and end of the game.

The Challenge, Red vs Blue: Score as many points as possible by hitting your team's targets. Targets light up randomly, you need to tap the most targets of your color.

Ideal structures for this mini-game: This game being a game of speed, Air and Volume advises you to use this game mode in small structures (Beach hut, Pitchounes, Small Complexes, Bouncy castles with obstacles ...)
Here is a video of the game Red vs Blue:

The Battle : All targets are on. You have 2 minutes to extinguish all of your team's targets. The first team to have extinguished all its targets wins the game.

Ideal structures for this mini game: In this game all the targets are on. You can use this mode in any structure even if we advise you to turn to a large structure to take full advantage of this game mode. The Inflatable Courses are quite suitable for this game mode. you can fix the blue buzzes on one side of the course and the red buzzes on the other side. You can thus create frantic races within your inflatable course.

The Treasure Hunt : At the start of the game, only one red target and one blue target flash, all the other targets are off. When a player taps a target, the target stops flashing and stays on until the end of the game. At this moment a second target of the same color will start to flash. The team that has lit these 5 targets first wins the game.

To facilitate the change of games, the recording of high scores or to stop a game during the game, we advise you to install the free application allowing to control the Buzz Flash remotely (to be installed thanks to the QRcode provided user manual or directly on the Play Store).

The 3 Game Modes of Buzz'Flash in our Inflatable Laser Arena:

An interactive system easy to install

The BUZZ'FLASH is supplied with pockets that can be attached to the walls with adhesive Velcro. You can choose the places you want to install your interactive game and even change their positions from time to time. The BUZZ'FLASH interactive system is very easy to remove, so you can operate your inflatable game without BUZZ'FLASH at any time. If you have several inflatable structures do not hesitate to alternate the BUZZ'FLASH on your different structures!

We show you how to set up and how to recharge your BUZZ'FLASH interactive game in our video below:

The BUZZ'FLASH is very easy to transport thanks to the suitcase.

The light targets, the screen and the loudspeaker are linked together by Bluetooth wireless technology. The dialogue distance between the targets and the screen can be up to 500 meters.

Autonomy of BUZZ'FLASH targets between 12 and 40 hours. Screen and speaker autonomy between 11 and 12 hours with the possibility of leaving them plugged in permanently.

We wish you good entertainment with the interactive game Buzz'Flash! 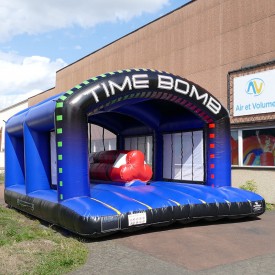 Dynamite Bouncy Castle: Watch out for the explosion ... of laugh !

The Time Bomb bouncy castle is an inflatable structure for children with a large jumping mat and a giant stick of dynamite! Children can have fun climbing on dynamite and once astride, rock from left to right or from right to left. The movements of the dynamite can make them slide and even make them fall on the mattress of the inflatable game. To ensure maximum safety, this inflatable game is equipped with protective nets on the sides and bottom of the structure.

Children will be able to invent many stories, some by jumping in all directions to mimic an explosion, others trying to blast the bomb or defuse it. Attention an explosion of joy is imminent ! 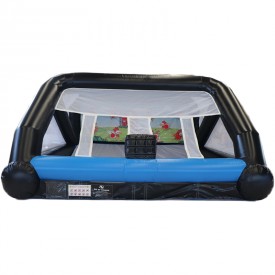 An Inflatable Shooting Range for your Buzz'Flash games

The Inflatable Shooting Range is a play structure that can accommodate Buzz'Flash Shooting Game targets. These targets fit into the Velcro pockets located on the back wall of the structure. This shooting range can be used with NERF type pistols, plastic bullets ... This inflatable shooting enclosure can accommodate between 2 and 4 players for games of 2 minutes maximum. The players are divided into 2 teams (either 1 against 1 or 2 against 2) with a color assigned to each team. Players must aim and hit their targets to earn the most points. For even more fun, you can choose between 4 different game modes! Game Compatible with the interactive game Buzz'Flash! A fun and customizable game! The Buzz'Flash Shooter Shooting Range is a perfect game to liven up a playground. It is equally well suited for adults as it is for children.

On request, it is possible to customize the background impression of the game. You can thus choose a theme or a decor that will best suit your leisure space.

The price announced is from Nogent-le-Rotrou. Buzz'Flash case not included with the purchase of the Shooting Range. 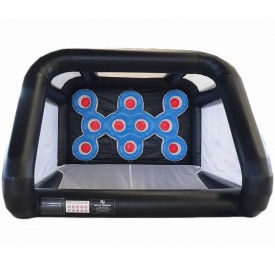 This shooting arena has 10 slots that can accommodate our interactive Buzz'Flash targets. This inflatable arena allows 2 teams to compete in shooting games with pistols, archery ... The team that shoots the most targets of its color within the time limit wins the game. The walls Inflatables and protective nets allow the projectiles to remain within the playing field. These balls are then easily recovered thanks to the inclined net at the base of the structure. Choose from 4 shooting game modes to spice up your shooting games!

The Inflatable Shooting Arena is of course compatible with our Buzz'Flash Interactive Targets.

The advertised price is from Nogent-le-Rotrou.
Buzz'Flash suitcase and NERF pistols not included when purchasing the Shooting Arena. 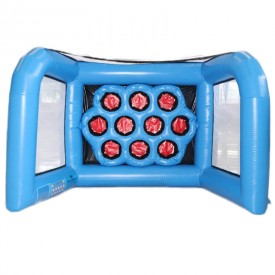 Offer an interactive and fun animation: The Shooting Range! This small shooting range is playable by including our interactive Buzz'Flash targets (not included with the purchase of the game). Choose from 4 available game modes and may the best one win. Practical: thanks to its small size, this inflatable game is easy to install and does not take up much space. Inflatable walls and protective nets allow projectiles not to bounce too far and stay close to the playing area. This inflatable shooting range is compatible with NERF pistols (not included)

The price announced is from Nogent-le-Rotrou.

The Buzz'Flash Case is not supplied with the Inflatable Mini Shooting Range.